This is an archive of the former website of the Maoist Internationalist Movement, which was run by the now defunct Maoist Internationalist Party - Amerika. The MIM now consists of many independent cells, many of which have their own indendendent organs both online and off. MIM(Prisons) serves these documents as a service to and reference for the anti-imperialist movement worldwide.

Militarism is war-mongering or the advocacy of war or actual carrying out of war or its preparations.

While true pacifists condemn all violence as equally repugnant, we Maoists do not consider self-defense or the violence of oppressed nations against imperialism to be militarism. Militarism is mostly caused by imperialism at this time. Imperialism is the highest stage of capitalism--seen in countries like the United $tates, England and France.

Under capitalism, it is imperialists who profit from war or its preparations. Yet, it is the proletariat that does the dying in the wars. The proletariat wants a system in which people do not have self-interest on the side of war- profiteering or war for imperialism. That necessitates elimination of the capitalist class.

Militarism is one of the most important reasons to overthrow capitalism. It even infects oppressed nations and causes them to fight each other.

It is important not to let capitalists risk our lives in their ideas about war and peace or the environment. They have already had two world wars admitted by themselves in the last 100 years and they are conducting a third right now against the Third World.

Even a one percent annual chance of nuclear war destruction caused by capitalist aggressiveness or "greed" as the people call it should not be tolerated by the proletariat. After playing Russian Roulette (in which the bullet chamber is different each time and not related at all to the one that came up in previous spins) with 100 chambers and one bullet, the chance of survival is only 60.5% after 50 turns. In other words, a seemingly small one percent annual chance of nuclear war or other environmental catastrophes means eventual doom. After 100 years or turns of Russian Roulette, the chances of survival are only 36.6%. After 200 years, survival has only a 13.4% chance.

A victim of the U.$. atomic bomb dropped on Hiroshima. 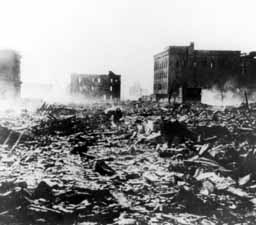 Fire in Hiroshima flattened the city, but today's bombs are much more powerful.