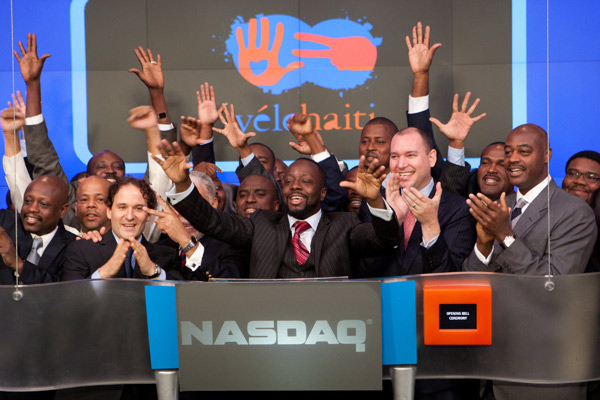 Wyclef declares, "Haiti is open for business" to finance capitalists

How long shall they kill our prophets,
While we stand aside and look?
Yes, some say it's just a part of it:
We've got to fulfill the book.
Won't you have to sing
This songs of freedom? -
'Cause all I ever had:
Redemption songs -

Wyclef Jean, the Haitian musician and former member of the hip hop group the Fugees, has announced his candidacy for president of Haiti. He says he was pushed to do so now because of the destruction that followed the earthquake in Haiti in January and claims that he was drafted by the Haitian youth, who he says are over 50% of the nation's population. He seems to be borrowing from the Obama campaign with his main qualification being that he's "new," i.e. "change."(1)

In ULK 10, MIM(Prisons) pointed out how hip hop has become a global culture because of imperialism. It was the "Made in Amerikkka" label that made it so popular around the globe, where Third World people have been brainwashed to see their own cultures as backwards and uncool. Just as the imperialists have used hip hop to recruit oppressed nation youth in the United $tates to kill oppressed nation youth in the Third World, now they are using it to push a new U.$. puppet on the people of Haiti.

What Wyclef is doing with hip hop is what the gender aristocracy has done with its brand of wimmin's liberation in the Middle East. Despite being a forty-year-old man, who pulls in $18 million a year, he is claiming to somehow represent the interests of the Haitian youth because of his role in hip hop.(2) Let's be clear, a slum-dwelling child in Cité Soleil has very different interests than Wyclef Jean, just as a Muslim womyn in the mountains of Afghanistan has very different interests from Paris Hilton.

What the imperialists are hoping for is that hip hop culture will serve to sugar coat this new puppet regime in the eyes of Haitian youth. In a country where children eat mud pies to keep their bellies full and less than 3% of the population voted in puppet elections last year because the popular party Lavalas was banned from participating, a few sweet songs from Wyclef probably won't be enough.(3)

While not forced to eat mud pies to fight hunger pains, many oppressed nation youth in the United $tates were sucked in by the campaign of Barack Obomber. And there is a direct relationship between the first Black U.$. president and Wyclef who performed for a mostly Black audience at the Black Entertainment Television (BET) inauguration party for Obama where he reportedly serenaded Colin Powell with "Redemption Song" by revolutionary Jamaican musician Bob Marley. Colin Powell preceded Obama in putting a Blacker face on the White House, serving as Secretary of State, where he will be remembered most for lying about so-called "weapons of mass destruction" to justify the U.$. invasion of Iraq, which continues to this day. It is sick that Wyclef would use Marley's words to serenade such a killer.

Bob Marley was the target of assassination attempts by right-wing militias linked to the U.$. puppet regime vying for power in Jamaica in 1976. Ultimately, it seems he may have been killed by the CIA itself.(4) Like Haiti, Jamaica is a Caribbean island inhabited by former African slaves dominated by U.$. imperialism. Compare Marley to Haitian musician Wyclef Jean (who likes to cover Bob Marley songs) who got on MTV and supported right-wing militias that fought to oust popular Haitian President Jean-Bertrand Aristide, killing many civilians in the way. More clues as to why he would say such things include reports that Jean's uncle has been the ambassador for the U.$. puppet regime in Haiti in the United $tates, and publishes a newspaper that backs the bloody attacks on the Haitian people by the militias.(5)

Following the kidnapping of President Aristide by the United $tates in 2004, Wyclef Jean's charity was reportedly the first group allowed into the central slum Cité Soleil, backed by millions of dollars from the United States Agency for International Development (USAID). The same USAID that former U.$. President Bill Clinton has used to undermine Haitian sovereignty for years. Jean pressed Haitians to lie down in the face of occupation as U.$.-backed troops from the UN and Haitian militias gunned down the resistance in the Haitian slums.(6)

The imperialists kidnap, imprison and kill the people's leaders and then use their images to mislead. How desperate have they become that their puppets now come wrapped in the images of those they have attacked and even assassinated? They may be desperate, but they're smart.

Originally the voice of oppressed nation youth, hip hop has a strong dual role to play across the world today. But more and more, if it's coming from the United $tates — buyer beware. In recent decades, the increased wealth Amerika grants to Black men has come disproportionately through the entertainment industry. Black men regularly appear on magazine covers with photoshopped bodies, selling you beauty products, a role often considered the domain of white wimmin. This has led to the recent phenomenon of Black men, formerly the main victim of white female gender privilege, becoming a significant portion of what we call the gender aristocracy. Rather than appealing to the gender oppressed as wimmin, hip hop appeals to the gender oppressed youth. The state department has drawn from this once righteous rebellion, often epitomized in hip hop, to build the concept of a global youth culture.

Hip hop is a major front on the modern imposition of imperialist culture on the oppressed. While this doesn't preclude hip hop from playing a progressive role, those who reject Western culture will resist the corrupting influences of empire more easily. With a strong history of resistance to imperialist intervention, we are confident that the Haitian people will give the cold shoulder to this current attempt to install a puppet in hip hop clothing.