Internationalist Solidarity with Haiti from Behind Bars

by PAPO of United Struggle from Within January 2010 permalink 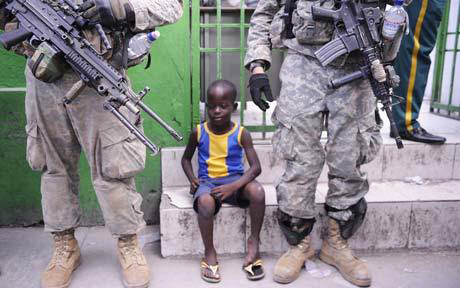 As we embark on 2010 it seems that a tragic disaster has struck the Afrikan people. A few years ago it was hurricane Katrina and now Haiti. I was just building with the brothers on how in 1804 Haiti won its independence, defeating the French imperialists on January 1st. Twelve days later an earthquake rips trough Haiti at the magnitude of 7.0. Now, I'm not sure who is to blame, but I have my suspicions. You know, since 2006 there's been a tsunami in South Asia, a hurricane in New Orleans, and now an earthquake in Haiti. All are dark skinned nations! Like I said, I have my suspicions, which I'll get into later.

Sisters and Brothers, we need to come together and focus on Our people in Haiti! We, the brothers of a plantation in New York called Clinton [Correctional Facility], have got together and we were so moved by the horrible images on the news, newspapers and radio that we are willing to donate clothes, food and money from our accounts to help our Afrikan Haitian mothers, fathers and children.

As New Afrikans, we understand fully our purpose in life and it's to help our people whether they be in the u$, Cuba, Afrika, Brazil, Jamaica, etc. We understand that the Amerikan Red Cross takes out a percentage from the money donated and we really don't want that type of middle man pilfering from our donations. So we ask if you can have an outside agency that's willing to come to this plantation and others throughout New York to pick up the items of clothing, food and an address that we can write to send our funds and condolences. We are talking with the Superintendent and hopefully by the time you respond we should be ready to go. We really do hope you can help us help those in need.

Bloods and Crips, I ask that we take a minute to understand that we as a people just lost close to 50,000 men, women and children in less than 24 hours! That number unfortunately will rise in this catastrophic event. Please, please, please stop the tribalism and join forces and help our people! At this rate we'll be extinct in no time!

MIM(Prisons) responds: Many more than 50,000 have died and many more will. The situation in Haiti is horrendous and as this writer goes on to point out, this does not happen to europeans or amerikans. He draws parallels to the ethnic cleansing that took place in New Orleans and Southeast Asia following hurricanes and tsunamis. This comrade blames it on man correctly,
[see our correction for this article]

It was not long ago that the united $tates went into Haiti and kidnapped President Aristide, who has been in exile ever since. As the Haitian people call for his help in their time of need, 5 digits worth of u.$. troops march into their country, controlling everything and allowing little aid to get through. The history of u.$. "aid" to Haiti is well-documented and clearly not in the interests of the Haitian people.(1)

Real solidarity means supporting the self-determination of Haitians. If you want an organization that claims to send all its money directly to Haiti, you could donate to the Bush/Clinton fund. (It may end up being sent in the form of occupation troops though.) The real standard of where to send aid should be where the Haitian people are building their own institutions. Years ago the united $tates crushed programs that were developing Haitian medical personnel, and now amerikans want to pretend to be their saviors.(2) While we do not endorse any particular funds at this time, we have compiled some information on groups that may be able to get donations into the right hands.