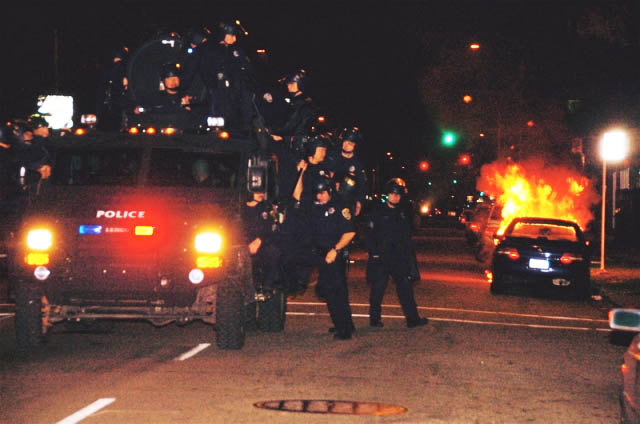 At night I see your light through my bedroom window
But I ain't got shit but the pad and pencil
I can't wait till I hear you say, " I'm going down, mayday, mayday"
I'm gonna clown 'cause every time that the pigs have got me
—from Ghetto Bird by Ice Cube

Oakland, California is not quite like Los Angeles. Having to fall asleep to the sound of helicopters overhead night after night is not routine. But in the last week that changed with three nights of uprisings and demonstrations in response to the murder of Oscar Grant, a 22 year old Black man who was shot in the back by a cop while face down on the ground.

Chemical warfare, tasers, armored vehicles with mounted guns and numerous helicopters were used by the city of Oakland against its residents the first night of the uprising. Over 100 people were arrested for various trumped up charges. Those who were not bailed out have already been given hearings where 21 of 24 people had their charges dismissed. One of the 3 remaining charges is a felony arson charge against JR, the Minister of Information for the Prisoners of Conscience Committee, indicating clear political motivations behind these arrests. Last night another couple dozen people were arrested. It took 2 weeks to arrest someone who shot a man in the back, but the OPD saw it as appropriate to jail over 130 people, most, if not all, of whom have no substantiated charges.

Just as they tried to do the night of the murder, Oakland pigs confiscated all cameras and cell phones from those arrested. Some who were arrested have not got their cameras back and others have gotten theirs back with the material erased from them. Numerous people videotaped the shooting of Oscar Grant on New Year's Eve, leading pigs to go around seizing peoples' cell phones in an attempt to destroy evidence.

JR is one of many who reported being rushed and tackled by police while merely standing on a downtown street during the demonstrations. In another instance, a group of pigs marched across the street towards a group of protestors when one of the thugs approached a Black youth and shoved him in the chest. The pigs waited for a response and then seized the kid, leading to a scuffle between the two groups followed by the youth running away.

After the roundups the first night, JR reported, "Behind enemy lines, the inmates at Santa Rita put their fists in the air, smiled, cheered and gave us dap when we told them that we were being held captive because we were in the streets during the rebellion. Mexicans were congratulating Blacks, Blacks were congratulating whites, Norteños (a Latino street organization) were congratulating Bloods (a Southern Cali street organization), who are their rivals, for their participation in fighting the police and the city for justice against police terrorism."(1) In our next issue of Under Lock & Key we will focus on the question of peace between lumpen organizations. Practice demonstrates that great injustice is often the only thing that can undo the work the pigs do to keep oppressed youth at each others' throats.

As many have pointed out, this case has gotten so much attention because it was so blatant and it was videotaped by numerous people. The sick part is that many people are still saying things like, "you don't know what you'd do in a high pressure situation like that" and that the cop "has already suffered enough." The guy shot an unarmed persyn in the back while he was on the ground!

The only way to do justice to Oscar Grant is to prevent incidents like this again in the future, which requires eliminating the biggest and deadliest gang plaguing the streets of cities across the united $tates - the pigs. While this was going on in Oakland, comrades in New York were organizing a demonstration for Justice for Imam Morales, who was killed by the NYPD on September 24th, 2008. Two other Black men were killed by the pigs on New Year's Eve, the night Oscar was shot in cold blood. We can keep adding to the list of names, or we can stop the perpetrators.

The movement for justice for Oscar Grant has demonstrated the pitfalls of coalition based organizing and the need for a vanguard organization to provide leadership.(2) There has been a lot of talk about the Panthers in the last couple weeks, and their presence is missed. Without the vanguard party, a coalition of interested parties have decided to work together. To do so requires reducing the coalition to the lowest common denominator, and in this country in this time, that's not very good. One of the leaders of the the coalition linked the recent murder charges brought against the cop who shot Oscar to the new hope that comes with a Black man in the white house. Such hopefulness ignores the real reason why the police exist, and why their presence is so strong in certain communities.

MIM(Prisons) joins in the demand for criminal prosecution of the pig who killed Oscar Grant. But we don't have to sit down with the state to make this demand. The city is clearly responding to the demonstrations in the street, first when it made a statement to quell the first uprising after a week of silence and then when it arrested the shooter the night before the last demonstration. Lesson 1: The people can exert power independent of the state.

Ain't shit changed cuz Obama in the house.
O P D had 15 murders, man
that's all we know about
cuz that's all that we heard of
all the peckerwoods better hide tonight,
cuz my city frustrated, they 'gon riot tonight.
I don't condone the riots
cuz we burnin' down our own shit.
But I ain't mad at them cop cars that they hit.
—from My Life, a tribute to Oscar Grant by Mistah F.A.B.

As all this goes down, there has been much debate in the streets about what is OK to smash and burn, if anything. The smashed windows and burning cars are only the expression of anger towards the pigs. It is out of fear and a sense of powerlessness that people cannot attack the object of their anger and lash out on inanimate objects instead. We don't condone random property destruction as a tactic for change, but if a real solution is to come of all this, it is not going to come from those who are working within the capitalist state. Anarchists want to expand the actions of the more radical sections of the demonstrations, while focusing on more "corporate" targets. But nights of Black youth roving the streets among groups of riot cops, being videotaped and snatched to prison cannot continue much longer. Lesson 2: The spontaneous youth must come together and exert their power in more meaningful ways, within the context of national liberation struggles and anti-imperialism.

They discover that the success of the struggle presupposes clear objectives, a definite methodology and above all the need for the mass of the people to realize that their unorganized efforts can only be a temporary dynamic... you'll never overthrow the terrible enemy machine, and you won't change human beings if you forget to raise the standard of consciousness of the rank-and-file. Neither stubborn courage nor fine slogans are enough.
—from Wretched of the Earth by Frantz Fanon