U.$. Out of Africa! Shut Down AFRICOM! 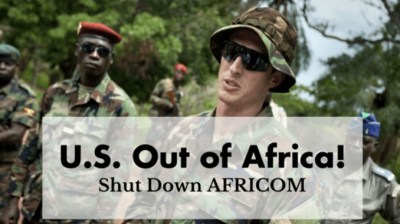 AFRICOM is an imperialist project led by the United $tates for the last 10 years to occupy and control African countries. United Struggle from Within has taken up the call of the Black Alliance for Peace to petition the Congressional Black Caucus to move to close all U.$. military bases on the African continent.

We think it's important to let the imperialists and their lackeys know that many prisoners disagree with their oppressive and genocidal polices which continue to underdevelop the Third World. Given the state of USW at this point in time our cell is sure USW as a whole can rack up signatures in the thousands!

BAP has set a goal of 10,000 signatures by Martin Luther King, Jr.'s birthday on 15 January 2018. Let's show USWs true anti-imperialist spirit between now and then!

MIM(Prisons) assembled a packet of info with petitions to distribute to campaign participants. Prisoners can write to MIM(Prisons) PO Box 40799 San Francisco, CA 94140 to get a copy.