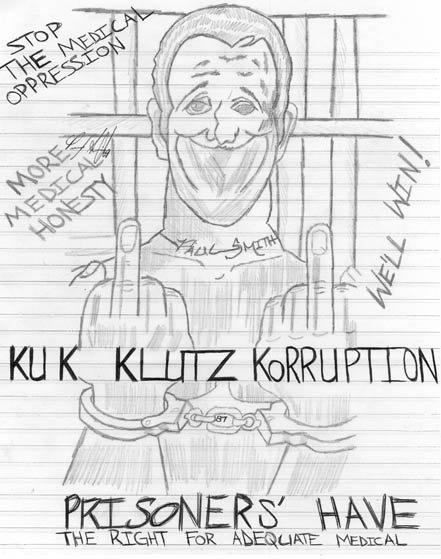 There has been a lot of talk about "health care reform" in the u.$. this year. Like other government-led reforms, there is no progressive side to this debate. It is between the wealthy libertarian individualists who want to retain the power to pay lots of money for highly specialized care on demand, and wealthy labor aristocracy activists who want to make sure the wealth of health care is shared out among Amerikan citizens. Neither side represents the interests of the world's oppressed. When they talk about "Universal Coverage" they are never talking about more than 15% of the world's population.

As we approach the end, the anti-climatic outcome of all the hyped media and political hoopla supports the theory that it was nothing but a distraction. This is a much safer debate than what would come out of discussions of Obama's expanding war on the Middle East and Central Asia. But we will indulge this topic for an issue of Under Lock & Key because we think our comrades have some interesting things to say about health care that is being left out of the amerikan dialogue, particularly in relation to the disproportionately incarcerated nations.

The connection between wealth and health

Under imperialism, the wealthier a country is the better health care the population can expect to receive, which results in a healthier population (measured by things like life expectancy and lower rates of key mortality indicators for children and for some common diseases). This is not just based on individual wealth, or ability to pay, but on national wealth that is accumulated by those that exploit other nations. Infrastructure such as water sanitation, hospitals and medical schools are all concentrated in the First World. This is a material benefit of imperialism that is not directly about income.

Wealth also brings its own health problems in imperialist countries. Where people are "free" to eat at McDonalds and KFC whenever they want, and where it is actually cheaper to eat this food than to buy fresh vegetables, obesity and related diseases are a growing health problem, a problem poor countries can only dream about. Wealthy countries have the money to solve these and other health problems, but capitalism perpetuates illogical systems like subsidies for the Amerikan corn industry which let Amerikans buy unhealthy foods for less than they cost to produce. For this reason, overall health is something that all people can expect to improve under socialism, including the labor aristocracy and imperialist oppressor classes. Capitalism is inherently inefficient at meeting humyn need, even in the rich countries.

Despite spending the most on health care of all countries in the world (both overall and directly out of pocket), compared with other First World countries, the u.$. has one of the lowest percentages of its population covered by health care and has some of the worst health indicators when compared to those same wealthy countries.(1) The u.$. doesn't even make it in the top 40 countries for life expectancy. In the u.$. the health gap between rich and poor is far wider than most other First World countries.(2,3) And overall Amerikans live shorter lives than people in every western European and Nordic country except Denmark.(4) These numbers are all skewed by oppressed nation populations in prisons, ghettos, barrios and reservations where health care statistics are often comparable to the Third World. An example of this is the 50 year life-expectancy gap between Asian males and Black males in the u.$.(4) Other examples are in the reports from behind bars accompanying this issue of Under Lock & Key (ULK12 - January 2009).

Countries that provide health care have higher taxes than the u.$., but they also have no persynal medical bills, and generally have overall better health than the u.$. That Amerikans believe that the proposed "universal" medical coverage in this country would be a bad thing for Amerikan citizens is a wonder of political pundits and advertising. Individualism in Amerika is a disease that leads people to value extending the life of an 80-year-old man with terminal cancer for an extra month over preventing the deaths of 100 people from diabetes and cardiac conditions.

The way countries generally fund health care for all their citizens is through taxes. The same way most countries, including the united $tates, provide education, fire, road, sanitation, and other basic infrastructure services. This is most certainly not socialism. It is just capitalism taking care of its own citizens to the extent necessary to perpetuate capitalism. In First World countries this is a pretty high standard of living; in Third World countries this is often barely enough to sustain a workforce.

In the health care debate within Amerika there has been some confusing rhetoric about what will cost the government and the people of this country more money. In terms of keeping its well-off citizens happy for a price the imperialists can afford, ignoring Amerikan single-minded individualism and forcing through some sort of "universal" health care plan is probably in the best interests of this country. However, universal coverage for Amerikan citizens is basically off the table as an option, thanks in no small part to very heavy lobbying and financial contributions from the Amerikan health care industry. By the end of September almost $300 million was spent by health care industry lobbyists.(5)

The failures of the health care system in imperialist Amerika serve as a good example of why capitalist individualism is an impediment to the health and welfare of even its own citizens. But we communists are not interested in reforming health care in imperialist countries to better serve imperialist citizens, because there is no significant net improvement in humyn health to be had in that struggle.

Saving millions of lives through changes in health care is easy; it is only those who benefit from those deaths that stand in the way. Just like every other debate over taxes, Amerikans are fighting over how to spend the superprofits stolen from the death and suffering of the Third World. Real health care improvements cannot occur in the exploited nations until they have liberated themselves from the imperialist economy that enforces this relationship.

The myth of universal health care

For the oppressed people of the world there is no such thing as universal health care. The life expectancy of the oppressed is alarmingly lower than wealthy First World citizens. In early 2009, the World Bank estimated that 11 million children die each year from lack of health care, sanitation, food and clean water.(6) These are the most basic of health care needs.

Relatively cheap solutions to common problems could prevent far more deaths and suffering than any of the proposals for reshuffling superprofits in the united $tates. By dealing with these simple but massive problems first we would vastly increase our healthy population, which could better address the more complicated health care problems others face. But such an approach would require a system that serves humyn need. Not even a system that serves the need of every persyn in the elite 15% (i.e. all Amerikans) can unleash such powerful forces.

The premature deaths and chronic illnesses of Third World people are a direct result of imperialist occupation and exploitation, serving as a tool of population control, both in numbers and in ability to take effective anti-imperialist action. Amerika sends billions of dollars in "aid" to foreign countries, and just a small fraction of this could provide clean water and sanitation and prevent rampant and debilitating diseases that exist only in Third World countries. The 1.5 million children who die each year from diarrhea could be saved with clean water and sanitation and cheap medical supplies, and 2 million who die from pneumonia need only existing vaccines and inexpensive antibiotics.(7) The Amerikan government rushes to send military aid and troops to ensure access to oil and stable pro-imperialist regimes, but can't be interested in spending a small fraction of that money to save the lives of these children.

Imperialist exploitation of the labor of people in the Third World is made possible by direct military intervention and funding for military regimes that are puppets to imperialism. And this has dire consequences for the health of the exploited around the world. For instance, Amerika's 20-year battle for control of Iraq has included sanctions and then military action that destroyed the infrastructure and health care in that country. From just the sanctions alone deaths among Iraqi infants and children under 5 doubled in 1991.(8)

Amerikan imperialist companies that provide health insurance for their Amerikan citizen workers don't even consider offering any kind of health care for their Third World workers, and those are the people most in need of health care. Workers in Haiti can expect to live only 62 years and in India only 64, and they have a high chance of dying of easily preventable diseases, but the Amerikan corporations many of them work for offer no help.(9) And while the Amerikan corporations, government and people are benefiting from the imperialist profits (often in the form of inexpensive goods & services) made off of the Mexican workers, they're not even discussing extending "Universal Coverage" health care to them.

Health Care for the people

The best example of health care truly serving the interests of the people existed in China between 1949 and 1976 when the communist government dramatically improved the health of the people. They did this by focusing on preventive care, sanitation, and education, combined with a massive campaign to get health care out to people in the countryside previously unable to access doctors.

Four basic guidelines for the organization of health care were developed at The People's Republic of China's first National Health Congress in August 1950:

Before 1949, life expectancy in China was just 35 years and the illiteracy rate was 80%. In 1979 life expectancy rose to 68 years and illiteracy had declined to less than 7%. As a part of the dramatic improvements in health, the Chinese infant mortality rate was reduced to a lower level than in New York City. Looked at another way, China achieved a drop in death rate per 1000 from 28 in 1949 to 6.3 in 1978.(10)

Essentially China achieved health for its population comparable with much wealthier countries by the end of the 1970s by focusing on serving the people rather than serving the profits of the wealthy. Building such a system of health care came only after the forceful removal of imperialist powers from China and the destruction of the former institutions of rule.