by Wiawimawo of MIM(Prisons) October 2010 permalink 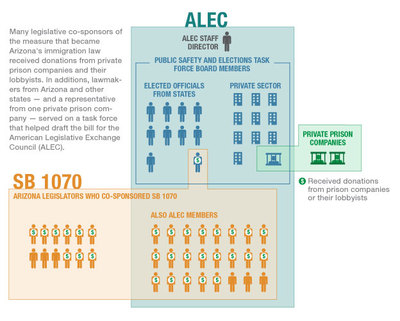 By aligning Amerikans' immediate interests with their long-term interests, the militarization of the U.$./Mexico border has become a machine that will not likely slow down on its own. This machine is propelled by the imperialist politicians, imperialist businessmen (often the same people), and the Amerikan labor aristocracy. This collusion of interests at a time when Amerikan hegemony is fragile spells danger for the oppressed nations, in particular for Aztlán.

National Public Radio (NPR) released a report this week exposing financial and political connections between the Correctional Corporation of America (CCA) and those behind Arizona's oppressive SB1070 law.(1) The law, which is still under judicial review after being put on hold, legalizes racial profiling and empowers state police to enforce federal immigration laws in the process. The scandal, now being denied by the bill's sponsor Senator Russell Pearce and others, is that they passed the law to increase their income and the profits of their corporate backers.

Without SB1070, CCA was getting an estimated $117 million a year from the federal government for imprisoning migrants. Meanwhile, Wackenhut/G4S, the next largest private prison company, has a $76 million a year contract to bus migrants around the border for the U.$. government. Of course, both of these sums are chump change compared to the $3.6 billion budget for Border Patrol in 2010.(2) All of this is federal money going to the oppressor nation to do its thing — oppress.

The essence of what is going on is Amerikans getting paid a lot of money to make sure Amerikans get paid a lot of money. That's why the border exists and why it must be militarized. If it is not, the masses whose labor value has been stolen and exported to the United $tates would come here to benefit from the fruits of their labor. Without closed borders, we can't keep the wealth inside.

The NPR report exposes the American Legislative Exchange Council (ALEC), an organization of state legislators and powerful corporations that get together to draft and propose laws (see figure above). The companies pay tens of thousands of dollars to attend such meetings with those who make the law. And according to NPR, the number of legislators who sponsored SB1070 was almost unprecedented and 30 out of the 36 received contributions from prison companies or prison lobbyists in the 6 months following SB1070's passage. Meanwhile, two of Arizona Governor Jan Brewer's top advisers are former prison lobbyists.(1) All of this makes CCA's and Sen. Pearce's denials of corporate influence look silly.

None of this is new to CCA, which was founded in Nashville, Tennessee by former chairman of the state Republican Party, Tom Beasley and his former roomy from the U.$. Military Academy at West Point, Doc Crants. Initial investors included the governor's wife, Honey Alexander, and the Speaker of the Tennessee House of Representatives, Ned McWherter.(3) Ever since then, their business model has relied on close political ties just as most military, defense and security business does. Apparently, CCA agrees with MIM(Prisons)'s assessment that migrants are and will continue to be the fastest growing prison population in the United $tates. But while we are fighting this trend, CCA is doing all they can to foster it.

When imperialism reaches the point where the arms of oppression are major sources of profiteering, and the people are dependent on these operations for their paychecks and standards of living (i.e. where oppression and the oppressors' financial interests become one in the same), we will see the national contradictions within imperialism heighten rapidly. This leads to increased repression both in laws and in actions but also the opportunity for raising consciousness and resistance among the oppressed nations. Even those Latinos who supported imperialist politics had to think twice about the Arizona law as it could impact their persynal safety if they visit that state. The imperialists expose their blatantly chauvinistic goals with these reactionary laws and the alliances that create the laws and it is our responsibility to point out the contradictions and organize against imperialist national oppression.