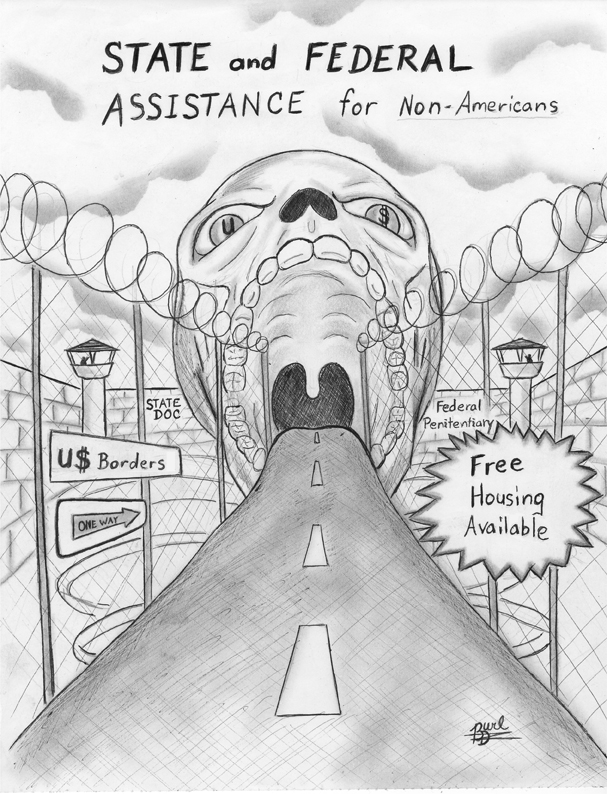 As the fastest growing prison population, migrants in detention have helped continue the decades long trend of rising imprisonment rates in the united snakes in recent years, while saving the private prison industry in the process.(1) Despite continued rhetoric about drugs coming into the u.$. through Mexico, the government drastically shifted resources away from drug enforcement to immigration enforcement following 9/11, and the prison population shows it.(2)

As of July 2009, there are 31,000 non-citizens imprisoned at the federal level on any given day in the u.$. This number is up from about 20,000 in 2006 and 6,259 in 1992.(3) There are more than 320,000 migrants detained each year by Immigration and Customs Enforcement (ICE), and as many as a quarter of them are juveniles. These numbers include only those imprisoned under federal custody, although they may be located all around the country and in state prisons and local jails. These numbers do not include people who may be imprisoned on criminal charges, but are not turned in to federal custody on immigration violations (such as in "sanctuary cities").

The American Civil Liberties Union says that the conditions in which these civil detainees are held are often as bad as or worse than those faced by people imprisoned with criminal convictions. These detention centers are described as "woefully unregulated." The "requirements" that they do have about how to treat people have no legal obligation, reducing them essentially to suggestions.(3) This leads to prisoners without u.$. citizenship being denied access to telephones, legal aide or law libraries, recreation, visitation, mail, medical care, toiletries, and the list goes on. People are kidnapped from their homes in the middle of the night and transferred without notification to their families. On top of that they often have no means of communication, leading people to become completely detached from their support systems and legal counsel. For u.$. prisoners, these conditions are nothing surprising or new. The difference for migrants is that the line between detention and punishment is blurred. Years ago, migrants were detained for 4 or 5 days, and then deported. Now people are being detained for up to 2 years (and possibly more), without ever being charged with a crime, let alone convicted, even by an illegitimate jury in an illegitimate u.$. court.

One reason migrant imprisonment is increasing is because after the prison boom of the 1990s, some prisons are sitting partially empty. The owners and financers of these prisons are begging for more people to lock up, and their solution is migrants. This is part of the parasitic imperialist economy, where filling prisons is seen as an economic stimulus even though it is a completely non-productive suck of resources.

Private prisons house 17% of people in ICE custody. The Correctional Corporation of America, a private prison management company who controls half of the detention facilities run by private companies, spent $3 million lobbying politicians in 2004. They want stricter immigration laws so they can have access to more prisoners, which will bring them more money. In turn, ICE is able to pay 26% less per day to house prisoners in a private versus state-run facility.(4) This is possible because of the lack of public as well as governmental oversight at private facilities, where they reduce costs by getting rid of everything that would help prisoners, including necessary-to-life medical care. One reason state governments shied away from private prisons for their own citizens was the scandals that they quickly became associated with. In the year 1998-99, Wackenhut's private prisons in New Mexico had a death rate 55 times that of the national average for prisons.(5) The migrant population's lack of voice allows these corporations to get away with their cost-cutting abusive conditions when contracted by ICE. This is another good example of how capitalism values profit over humyn life.

Yet, as we described in Amerikkkans: Oppressing for a Living, an increase in imprisonment doesn't serve the interests of just the private prison industry; CO and pig unions also reap major benefits. Since 9/11/2001 the u.$. has increased its border patrol from 8,000 agents to 20,000, 20% of whom are military veterans. Salaries start at $36,000 to $46,000 per year plus full benefits. The whole Department of Homeland Security (DHS), which includes ICE, brags about its budget exceeding $40 billion and providing high paying jobs for 166,234 amerikans.(6) Not only does DHS keep wealth within u.$. borders, it helps distribute it as well.

And similar to the military-industrial complex and prison-industrial complex we discussed in The privatization of war: Imperialism gasps its last breaths, Homeland Security contracts are based on who you know, not what you're selling, as former staff members sell their wares to their old employers.(7) Meanwhile, many of the smaller start-up companies that are cashing in are headed by overly-enthusiastic and openly racist Minuteman types.(8)

Of course, there are real economic benefits to amerikans as a whole by managing the populations trying to come into the u.$. If amerikans really made more money because they are just smarter and harder working, then they wouldn't be afraid to open the borders and allow competition for jobs. Instead, the demand for repression is forcing more and more farmers to employ prison labor for harvests when they used to use migrants. Free amerikan citizens just won't work for proletarian wages, not to mention it being illegal, so the argument that they want their jobs back is pretty weak. Though perhaps this is the perfect solution to keeping food cheap, while keeping foreigners out and the oppressed in prison. Migrant detainees do work in private prisons doing the day-to-day maintenance, and because they are not u.$. citizens DHS enforces a maximum wage of $1 per day.(9) While adequate food and housing are theoretically provided, this amounts to working and living conditions generally below those in their home region. Opposite the reactionary turn to border control, we challenge those who want jobs for everyone to work toward a new economic system instead.

ICE is not the only law enforcement actor in this scam profiting off humyn life. Under the Immigration and Nationality Act 287(g), local authorities can become authorized to officially enforce federal immigration law, while others are comfortable unofficially using the old vigilante trick of targeting specific people. This culture of oppression in the white nation runs so deep that an increasing number of u.$. citizens are joining in the traditional amerikan hobby of border patrol, volunteering with groups such as the Minutemen Civil Defense Corps. In response to much public outrage, President Obama has addressed the actions of the famous migrant humiliator Maricopa County Sheriff Arpaio by limiting him to only determining someone's immigration status when they've been jailed. This weak response of the Obama administration shows their support of such migrant oppression.

The white euro-amerikan nation has been systematically oppressing other peoples for centuries. One way is through exploitation and neocolonialism in Third World countries, where people are trapped as cheap labor by borders and immigration laws. Corporations pay little to no wages there and sell products for super-profits in this country. The dire economic situations cause people to leave their homes and often risk their lives to provide for themselves and their families. From 1995 to 2005 about 2,600 people died trying to come into the united $tates through Mexico.(10) Similarly, people regularly die crossing the ocean in makeshift boats from Haiti where the u.$.-imposed government refuses to meet the needs of the people. It's oppressive in one country so people decide to leave and come here thinking they will find better opportunities. Of course, what really happens is the oppression and exploitation of Third World people continues within the united $tates when people don't have a green card. Things are worse for the oppressed during the recent economic crisis. Many from Latin America are finding that opportunities are now superior back home, even though amerikans continue to live over-consumptive lifestyles in the united $tates. 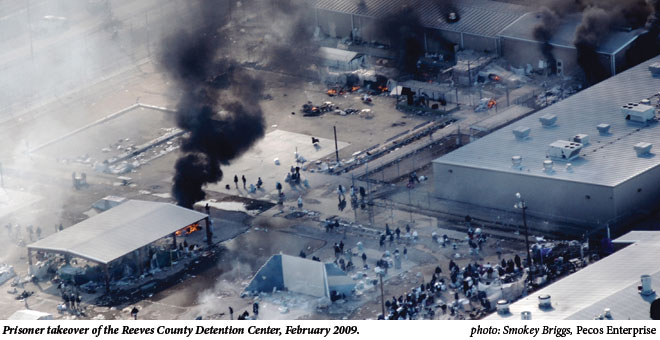 In the face of all this, there are people working toward solutions. In Pecos, Texas in December 2008 and January 2009, there was a series of migrant prisoner uprisings. They were finally set off by the death of a man with epilepsy, who died completely unnecessarily due to a blatant disregard for his life by refusing to give him medical care.(11) People of many different nationalities came together in rebellion, demanding better conditions. This is not the first or last murder of its kind, as unexplained deaths are common in u.$. prisons, including migrant detention centers.

Some u.$. cities are moving in the progressive direction of being "sanctuaries." Sanctuary cities allow people who may not be u.$. citizens to make money here to send home to circulate in their own countries. This is a roundabout way of moving toward a world without borders. However, with accusations that some mayors are "soft on crime," the sanctuary status may be threatened. Additionally, there's nothing stopping federal agents from going into these cities and enforcing federal immigration law, as they often do.

While we favor these progressive steps toward protections for migrants in the u.$., we acknowledge that they aren't enough to lead to the end of national oppression. They are fragile reforms at best, that can be as easily revoked (or simply ignored). Another solution some have is integration of migrants into the u.$. exploiter nation through exploiter-size wages. This is an effort to reduce their potential as revolutionaries to that of consumers and labor-aristocratic parasites. What we truly need to end national oppression of migrants in the u.$. is to expose the "amerikkkan dream," and revolutionize the workers to support revolutionary movements in the Third World.