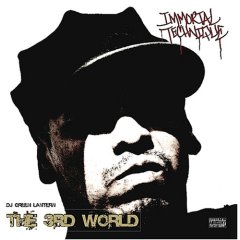 The long awaited third album from Immortal Technique hit stores today. It's not Revolutionary Volume 3, it's not the much hyped Middle Passage, but it's a mix tape with DJ Green Lantern called Third World. The title is fitting, as the album takes a pretty consistent perspective of the oppressed of the Third World. Tech's lyrics with samples to complement from DJ Green Lantern, over some banging beats, make this a highly recommended album to check out.

MIM's review of and interview with Immortal Technique received a lot of interest and response from readers of MIM Notes and etext.org in the past. The biggest criticism of Tech's politics has to be the role of the white nation as oppressor vs. ally in the revolution. On his first CD, he declared camaraderie with working class whites as a whole. But a comparison of Open Your Eyes off of Third World with The Poverty of Philosophy off of Vol.1 indicates that his politics have continued to develop in the internationalist direction that was more clearly pronounced on Vol.2. So, we see Tech growing ideologically, as well as musically on this new CD.

MIM(Prisons) mentioned Immortal Technique in a discussion of the principal contradiction, where we were critical of his treatment of Bu$h and bin Laden as one in the same. This stems from his reliance on conspiracy theories in favor of studying politics on the group level. But Third World is much lighter on conspiracy theory, and responds to this critique and the development of the principal contradiction globally by clearly allying with the jihad against u$ occupation. Tech even calls out all the rappers who used to be down with Allah, for turning silent out of fear.

Son, remember, when you fight to be free.
You see things how they are,
and not how you like them to be

He demonstrates the application of this materialism in his revolutionary theory that is based in internationalism and recognizes the principal contradiction between the oppressor and oppressed nations. Open Your Eyes is jam-packed with a great analysis political economy with a great hook. The first line sums it up nicely,

We're here because you are there.

The title track Third World is just as good, but more lyrical, staying on the topic of the truly oppressed with lines like:

it makes the hood in amerika look like paradise

They call us terrorists after they ruined our countries
Funded right-wing paramilitary monkeys
Tortured a populace,
then blamed the communists
Your lies are too obvious.

On these tracks, he also alludes to the impending invasion of the imperialist countries by the oppressed who will take back what is theirs. The album is very favorable to the Joint Dictatorship of the Proletariat of the Oppressed Nations. He also refers to the Reconquista in Hollywood Driveby:

everybody talking about the south taking over,
it's true motherfucker, but it's comin' over the border.

Many have been critical of Immortal Technique for homophobia and misogyny in his lyrics. Not that he is any worse than your average, on the contrary. But we might expect more from someone who is such a conscious revolutionary. There's nothing too feminist on the Third World and some of his comrades utilize some misogynist language. Of course, the whole album is very macho in Tech's typical style, but it is a revolutionary machismo that we could use more of. He does provide some good advice regarding sex and romance, like this verse from Reverse Pimpology that undercuts some of the sick tendencies of our romance culture, and goes on to put prisons, police and revolution as a higher priority:

most people are only players because they got played
and have not let go of that shit since the 7th grade
yeah, you got your heart broke
life sucks doesn't it
but you shouldn't fuck up someone else's life because of it.

We welcome the return of Immortal Technique with some new music that shows real development. We can highly recommend that comrades pick this album up, after you order your copy of the Unlock the Box DVD.