The Privatization of War: Imperialism Gasps its Last Breaths

by MIM(Prisons) May 2009 permalink
en español 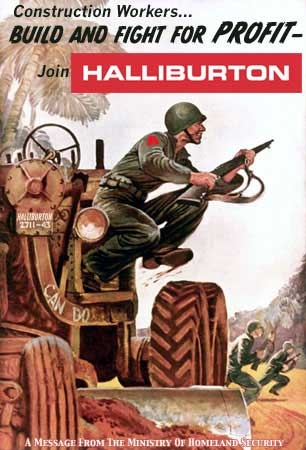 Halliburton, KBR and Blackwater (recently rebranded as "Xe") have all become household names in recent years, and generally with negative connotations. There is much to be said about their corruption that is detailed in the books cited below, and we will draw some parallels to the Prison Industrial Complex in this and other articles. But the bigger question for anti-imperialists is what this signifies for the development and maintenance of imperialism.

The books reviewed for this article describe the two sides of the modern imperialist military of the united $tates. On the one hand you have the state-run military that is buying off amerikan youth with the mall culture they are accustomed to, run by cheap Third World labor. On the other, you have armed contractors, often used for more elite operations, increasing salaries of u$ soldiers by 100% and probably moreso for mercenaries from the Third World. All combined, contractors came to outnumber u$ military personnel on the ground in Iraq. (Chatterjee, p. xvi) The stories of Halliburton/KBR and Blackwater spell out a clear trend: it is costing more than ever for imperialism to keep the personnel levels it needs to maintain global hegemony.

A microcosm of global economy

In Halliburton's Army, Pratap Chatterjee reports that wages for contractors in Iraq are tied explicitly to nationality. This picture is very telling for those who claim that amerikans deserve higher wages because they are more productive. Here you have people coming from all over the world to work on the same site and the pay rates are comparable to what they'd get in their home countries (usually they make more in Iraq). This rule still rang true in the common cases where the Third World persyn had more skills or knowledge than the First Worlder. Contractors from the united $tates who were unemployed and desperate for work started at $80,000 a year plus living expenses to supervise Filipinos who made $200- $1000 per month. One amerikan reported making $130,000 a year to work only 1 day per week. In Bagram, Afghan trash collectors were paid $10 for a 12 hour day, while Indians made $600 a month plus room and board working in fast food restaurants on the base. Filipinos who built the prisons in Guantanamo were kept in horrible prisons themselves, and paid $2.50 an hour for dangerous 12 hour days with no safety equipment. Abuses by contractors got so notorious that India, Nepal and the Philippines all made it illegal for their citizens to work in Iraq. (Chatterjee)

With 35,000 of 47,000 Halliburton employees in Iraq coming from the Third World (Chatterjee, p.142), and comparable wages being paid by nationality, you see a replica of the global economy that most First Worlders defend, even many so-called "Marxists." About 25% of the employees were making exploiter level wages, while the rest were Third World (mostly migrant) workers doing all the hard and dangerous work, for wages below the average value of labor. According to the oppressor nation left, Halliburton wouldn't employ the amerikans at $80,000 plus expenses if they weren't exploiting them. These pseudo-marxists think that an amerikan signing a check produces 10 times more value than a Filipino doing construction work or food preparation. On the global scale there are borders and oceans that somehow make this very same situation even more palatable to the oppressor nation.

While Halliburton's and Blackwater's ties to the federal government have long been in question, the government's 39th largest contractor is its very own Federal Prisons Industries (FPI) or UNICOR. (Wright, p. 111) Like the Third World labor behind Halliburton/KBR, author Ian Urbina asserts that the u$ military could not do what it does without the vast amount and diversity of products that FPI provides with prison labor that is paid $0.23 to $1.15 an hour (amounting to $400 million in sales to the Department of Defense in 2002). Franklin D. Roosevelt set up the company using legislation that forced the Department of Defense to purchase from FPI, even when their prices were not the lowest. (Wright, p.113) This move by FDR kept money circulating within the state to further fund its repressive aims, rather than allowing tax money to return to private hands in the form of profit.

This validates the overall patterns that MIM(Prisons) has seen; even the biggest prison labor-powered industry in the country is a subsidy for state repression, not a source of private profit. However we do recognize that the U$ military is not saving money by buying products from FPI - private industries can offer products for as cheap or cheaper. And so we don't agree with Urbina's implication that prison labor is essential to military operations.

Another interesting relationship between the military industrial complex and the prison industrial complex is found in Blackwater owner Erik Prince's $500,000-plus in contributions to the Prison Fellowship Ministries(PFM). PFM is an evangelical Christian organization that sends more than 50,000 volunteers into u$ prisons. (Wright, p.130) While MIM(Prisons) is kept from sending mail to prisoners all over the u$ for saying that revolution is necessary to end the plight of the oppressed, Prison Fellowship founder Chuck Colson has cited Thomas Jefferson to imply that Christian revolution is necessary in the united $tates. (Scahill, p. 95) Over 1800 facilities have granted PFM access to run programs inside the prisons that have enrolled over 20,000 people. Once again, we demonstrate that censorship of Maoist literature is about politics and not security.

Blackwater is busy recruiting former CIA operatives around the world as mercenaries, bribing them with u$-level paychecks. The outcome of this should help demonstrate to our critics the importance of the buying off of a whole nation. Amerikan nationalism provides a much stronger defense for imperialism than a mercenary army. Even if most of these mercenaries are steeped in fascist ideology that is conducive to imperialist militarism, the chances of conflicts of interests developing are significantly greater.

The globalization of the imperialist army is a sign of weakness, not of growing strength. Soon there will be absolutely no way for their army to grow (except with robots).

From the Civil War to the Cold War, the u$ national military was not recruited through profit motives. However, while amerikan nationalism provided a strong base for imperialist militarism, the continued increase in demands of the parasitic nation eventually undercut their willingness to fight and die for their nation. They could hire Mexicans to do their housework and manual labor, while hiring East Asians to do their industrial production, couldn't they just hire someone to handle the dirty work of fighting their wars for imperialist plunder? Or to paraphrase Chatterjee, amerikan soldiers went from peeling their own potatoes in tents that they set up themselves to having Third World workers serve them all you can eat dinner buffets. You know, to make it feel more like home.

U$ military public relations explains the need to provide such creature comforts as necessary to maintain an all volunteer army in the 21st century. (Chatterjee, p. 10) But the question of why a draft is not viable is the same question of amerikans not being willing to give up their cush lifestyles, which brings the threat of a draft resistance movement that feeds into anti-imperialism.

"It is no exaggeration that I live a higher lifestyle here on a base in Iraq than [I would] in the United States. We have free laundry, apartment-like housing with unlimited, free A/C and electricity, hot water, various American fast-food outlets, lounges, free Internet, coffee shops, and a large PX... Baskin Robbins ice cream... once a week we get steak and lobster... karaoke night, all kinds of sports teams..."

And he goes on to conclude,

"Yet just a few hundred meteres outside the fence, little kids are begging for anything: food, bottled water... The reality is very, very, very shocking. We are truly a pampered and spoiled culture." (Chatterjee, p. 11)

This is not a unique realization for spoiled amerikans to make when sent to war in the Third World. But as this soldier also points out, many are there for the very reason that they get better material conditions in Iraq. So they aren't exactly converting to internationalism in droves, despite the dose of reality.

Far from peeling potatoes indeed, Chatterjee describes the typical dining area with ice cream, waffle bars, lobster tails and elaborate holiday dinners, all free to soldiers. Other facilities on big u$ bases include a "mini mall" with stores like Burger King, KFC, McDonalds, Pizza Hut and Green Beans Coffee. He goes on to describe the "Scorpions Den": "one is greeted by almost pitch darkness, the background music from a one-hundred-seater open theater, the soft glow of laptops, and the flickering lights of video games... There are also free popcorn, boxes and boxes of bottled water... and a Dipping Dots ice cream machine." Then there is the "Sandbox" where "Dozens of soldiers sit slumped into fake leather armchairs, playing war games or programs like Guitar Hero and watching a Star Trek movie." (Chatterjee, p.6-7)

We see this as a new stage in the history of military recruitment by the oppressor nations. The brutal occupation forces of colonial powers in the Third World more than a century ago acted in their own direct interest. They were similar to the Conquistadors and settlers of North America centuries earlier, when amerikans stole the land they now occupy. The national unity they subsequently built on their stolen land and wealth, provided for over a hundred years of relatively successful forced military drafts. Today, however, amerikans like to pretend that their prosperity is not built on genocide and slavery. Combined with their very comfortable lives, the idea of going to war often seems not just unappealing, but unnecessary. In other words, historical amnesia may help undercut the oppressor nation as some don't understand what it takes to maintain their positions of privilege.

In the beginning of the 21st century, Halliburton had to double people's salaries to get them to go to Iraq as civilian contractors, not soldiers. But even then, is it worth risking your life when life at home is so comfortable? Amerikans allegiance to u$ imperialism is demonstrated in their politics, but when it comes to going to war, their actions will fall a bit short until they really start to see their material wealth start to diminish, which will happen once the Third World begins shutting of the paths of exploitation as it has in the past.

The military industrial complex will not be stopped by amerikan taxpayers. It is being stopped by resistance fighters who have ensured that only those who really need to be there are going to Iraq. Unfortunately, that includes many Third World nationals, some of whom are being held as prisoners while being forced to work for little to no pay under the most horrible conditions. More and more will learn the folly of trying to work for the imperialists. There is no future for the Third World nations within the imperialist system, only in resistance to it.

The debates about sending more troops or streamlining the u$ military are debates about optimizing u$ imperialism. The interesting part to us is that the struggle appears to be so acute as neither plan is proving viable.

In our criticisms of the prison economy and the labor aristocracy in general, we point to overpaid bureaucrats as a significant part of the problem. But MIM(Prisons) is not Libertarian. If anything, experience seems to show a greater degree of misappropriation of funds when services are contracted out. The cause of corruption is the profit motive, whether ownership is private or public. This is why nationalizing industries or banks does not stop exploitation, nor does it signal a move towards socialism.