by PTT of MIM(Prisons) September 2009 permalink 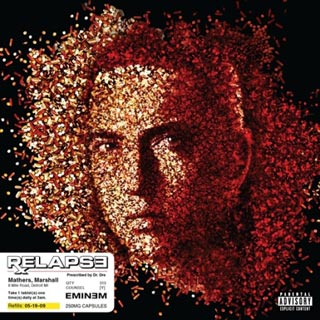 Relapse is Eminem's 6th studio album, released May 15, 2009, with the sequel Relapse 2 expected to drop November of this year. It sold over 600,000 copies in the first week of its release.(1) As the title implies, the content of the album is devoted to the many facets of Eminem's struggle with drug addiction. To any fan of Eminem, or anyone who's heard his older stuff, it should come as no surprise that the main objective of Relapse seems to be to perpetuate misogyny, primarily thorough rape fantasies. Although there are two whole entire songs depicting violence against wimmin ('Same Song & Dance' and 'Stay Wide Awake'), that isn't enough to keep Eminem from making references to rape and unwarranted physical contact throughout the entire album. Physical violence isn't just directed toward wimmin; there's violence against gays, graphic depiction of child molestation, and the rare allusion of violence against his peers.

The chorus to 'We Made You' is overly conceited, but with the lyric "Who could really blame you? We're the ones who made you" he is blaming the consumers for his audacity. That is partially true: if amerikans weren't so into individualism and misogyny, then they probably wouldn't be so into Em's shit. But even more true is the role that the corporate record companies have played in pushing it on the people, which you can read about in the title article to this issue of ULK.

There is also a consistent focus on the individual's problems throughout the album, instead of problems of the group. In fact, the only thing Eminem seems to have a group perspective on is that all wimmin are bitches. In the track 'My Mom' he relates all of his drug problems to his mother's addictions, as if she was one womyn separate from society. However, all of us are affected by the culture and society we live in, and drug addiction is one way the people in a fucked up society can adjust to living this way. It's likely that Mathers' mother was the strongest direct influence on him, but she is just a reflection of her culture and society, making that the real problem. In amerikan society it is especially important for us to combat individualism, because oftentimes, ideologically, it is the largest obstacle standing between the oppressed and increased public opinion for their liberation.

In real life, Mathers has been using the 12 step program for his recovery, which he mocks in the skits on Relapse. Twelve step programs, such as Alcoholics Anonymous or Narcotics Anonymous, may work to keep individual people from using. But on a group scale its goal is to adjust people to function without drugs in a messed up society, instead of addressing the problems of society, which can only be thoroughly dealt with through revolution. Of course, we don't think living under imperialism is easy, and people usually do need support outside of themselves to recover from addiction, and to be useful to the revolution. But we would prefer a 12 step program that's not focused on god and a "higher power" and instead focused on liberating oneself through liberation of the proletariat.

With all this talk about dealing with our problems, Relapse doesn't offer many solutions, even for the individual. 'Deja Vu' is a submission to addiction ("I wanna get away from this place, I do. But I can't, and I won't.") which is followed by the rap ballad and single, 'Beautiful.' 'Beautiful' is about fighting depression, and with a chorus like "Don't let em say you ain't beautiful/ They can all get fucked just stay true to you" it's the most, and only semi-encouraging song on the album. This can serve revolutionaries who are feeling alienated by their political views here in the belly of the beast, where the majority of amerikans are bought off by imperialism and aren't materially interested in revolutionary politics.

Dr. Dre keeps our heads bobbing, but beyond that, Relapse, and Eminem's career in general, is just another example of how imperialism and capitalism prioritize the mental health of the people last. It also is another tired example of how capitalism encourages the recording industry to push fucked up politics into hip-hop culture, and this reviewer expects more of the same from Relapse 2.