The Hidden Epidemic: An update on Amerikkka's homeless LGBT Youth

by USW 360 of United Struggle from Within October 2014 permalink

"[A]s societal advancements have made being gay less stigmatized and gay people more visible — and as the Internet now allows kids to reach beyond their circumscribed social groups for acceptance and support — the average coming out age has dropped from post-college age in the 1990s to around 16 today, which means that more and more kids are coming out while they're still economically reliant on their families. The resulting flood of kids who end up on the street, kicked out by parents whose religious beliefs often make them feel compelled to cast out their own offspring, has been called a 'hidden epidemic.'"

According to the Equity Project, leaving home because of family rejection is the single greatest predictor of involvement with the juvenile-justice system for LGBT youth.

Research done by San Francisco State University's Family Acceptance Project, which studies and works to prevent health and mental health risks facing LGBT youth, empirically confirming what common sense would imply to be true: highly religious parents are significantly more likely than their less-religious counterparts to reject their children for being gay.

The Center for American Progress has reported that there are between 320,000 and 400,000 homeless LGBT youths in the United $tates. The National Incidence Studies of Missing, Abducted, Runaway and Thrownaway Children put the number of homeless youth at 1.7 million. (Across the country there are only 4,000 youth-shelter beds, overall). Approximately one in five LGBT youth are unable to secure short-term shelter, and 16 percent could not get assistance with longer-term housing — figures that are almost double those of their non-LGBT peers.

For LGBT kids who remain homeless, the stakes are clearly life and death: they are seven times more likely than their straight counterparts to be the victims of a crime; studies have shown they are more than three times more likely to engage in survival sex — for which shelter is the payment more often than cost. And every four hours a homeless LGBT youth dies in the streets, whether it be from freezing to death, a drug overdose, or assault.

The summer that marriage equality passed in New York, the number of homeless kids looking for shelter went up 40 percent, reported the Ali Forney Center — the nation's largest organization dedicated to homeless LGBT youth. Tragically, every step forward for the gay rights movement creates a false hope of acceptance for certain youth, and therefore a swelling of the homeless youth population. Up to 40 percent of LGBT homeless youth leave home due to family rejection.

Amerikkka's homeless LGBT youth is its hidden epidemic. Of the $5 billion the U.$. government spends on homeless assistance programs every year, less than five percent of that is allocated for homeless children, specifically. Amerikkka's homeless youth, in general, is its next true plague.

MIM(Prisons) responds: This comrade provides some useful data on homelessness and queer youth and exposes a tragic consequence of gender oppression for these youth. We do not, however, agree with the author's conclusion that homeless LGBT youth are a hidden epidemic in the United $tates. Especially not with the implication that the U.$. government should spend more money on homeless assistance, as if the imperialist government can help end a problem that they created.

We don't like to look at problems like homeless LGBT youth in isolation as a "hidden epidemic" because this encourages an analysis of such issues in isolation, and suggests that we should tackle them directly and Amerika will be able to find a solution if only the epidemic is exposed. While the United $tates certainly has enough money to eliminate homelessness, the reality of homelessness in the United $tates is a tragic byproduct of imperialist decadence and individualism. The imperialist system exists to enrich the oppressors, at the expense of the oppressed. And if a few citizens suffer or die in the process, that's not really a problem for the Amerikans in charge. While the vast majority of Amerikan citizens are benefiting as either oppressor nation (white) or beneficiary class (petty bourgeoisie), or both, there are those who society does not bother to help. Most homeless are cast off because they are part of oppressed groups: gender (including health status) and nation play a big role here, and this is what's behind much of the homelessness of LGBT people.

We should expose the vast problem of homelessness in the United $tates, as it is an embarrassing and clear example of a wealthy country that doesn't even care about the lives of its own citizens. Other less wealthy countries do a better job addressing homelessness (i.e western Europe, some Asian countries), so it could be solved within the structure of imperialism, but only for the citizens affected. The many people in the Third World who are permanently without home and living in poverty because of the exploitation and plunder of imperialist Amerika are the truly hidden homeless.

We should point out, as this author does, that gender oppression is playing a significant role in LGBT youth ability to survive, and this is something we must fight. Both of these elements of the homeless LGBT youth issue are symptomatic of imperialism. And so rather than rally people for more government attention to homelessness in Amerika, we should focus on the root cause of global homelessness and organized to overthrow imperialism.

MIM Investigated as STG in Florida

by USW 360 of United Struggle from Within April 2013 permalink

It has recently been brought to my attention by the Security Threat Group (STG) coordinator at this Correctional Institution that the Maoist Internationalist Movement (MIM) and cells thereof is/are currently pending STG classification in the Florida Department of Corrections. As a result all MIM publications will be subject to censorship as "STG material," the possession of being punishable by disciplinary action/confinement.

I am discontinuing my subscription(s) as well as correspondence due to the coordinator's interview as mentioned above.

MIM(Prisons) responds: We are still gathering information on this situation in Florida. We have seen a complete blackout of our literature to select individuals, but not the overall population.

We have repeatedly addressed similar situations in the past, stressing that the physical safety of both prisoners and staff at facilities where prisoners study Maoism and work with MIM(Prisons) has only improved to date.(1) Meanwhile, according to U.$. law, it is still illegal for the state to censor political speech, affiliation or association because they find it disagreeable.

A Plea for Educational Opportunities

by USW 360 of United Struggle from Within October 2009 permalink

I am writing on behalf of a great number of Florida prisoners. I have now been incarcerated, day for day, in the State of Florida, for over fourteen years. I was arrested at the age of eighteen, sentenced to serve the rest of my life in prison at the age of twenty, and will be thirty three years of age on Nov 4th, 2009. My first year in the state prison system, between the ages of twenty and twenty-one, I succeeded in earning my GED and completing a vocational course in small business management. After the age of 21, and due to my having a life-sentence, I lost virtually any further opportunity to participate in such prison education programs. At the time (1996-1997) those prisoners under the age of twenty-one were given priority enrollment in such programs - those over twenty-one were given a secondary priority based upon their release dates.

Since then, and over time in general, educational opportunities provided to the prison population collectively and overall, have only become more and more restricted. Not only are we no longer eligible for government grants or loans, but the state funds that were once allotted toward prison educational programs have been both dramatically cut from the state budget and absurdly funneled into other departments of the correctional (in no sense rehabilitative) system - such as those departments which advocate the building of more prisons. In fact, a more than significant amount of the state budget set aside for educational programs outside of the prison system, has gone disproportionately toward that same goal - the building of more, greater restricted prisons. As I write this letter there are many prisons throughout the state that have not a single educational program to speak of, period. On average, a Florida prison houses approximately one thousand prisoners. Of any of these groups of 1000, the vast majority have never attained neither a basic education nor a specialized skill. Without these tools, again and again they will fall by the wayside - as those who are better equipped, for whatever reason, continue to progress. The prison population, not only in the state of Florida but across the country, has boomed, and in many cases has exceeded maximum capacity. Supreme Courts in the State of California have ordered the reduction of its state's prison population by 40,000 people. It is nearing two times maximum capacity. Why?

Senator Webb, as I have already stated, I have been sentenced to serve the rest of my life in prison. But it wasn't until some point of my developing life - a period that some would say came too late - that I realized that I was indeed a part of a greater whole. I say this because regardless of my personal circumstances I hold fast to another conviction as well: the fact that I still have a life in which to serve. My service has spanned from both prison classrooms and prison youth tour programs, to prison recreation yards and even disciplinary confinement cells. I have helped both 40 year old men and kids as young as fifteen - yes, kids as young as 15 - learn how to read, write, and work arithmetic. And it is in that same spirit that I wish to be serving now by writing this letter, and giving them (us) a voice.

Senator Webb, I believe service is something you can relate to. I've heard speak of you over the BBC radio broadcasts, I recently read of your trip to Burma in Time Magazine, and your devotion toward the need to improve education, in general, was recently touted in an article published in the periodical Under Lock and Key. Whatever proposals you make, points you debate, objective you've set out to reach, and obstacles that will impede the way ... we would like to play a part as well.

Education, or the lack of, is the most relevant factor in the manifestation of (our) criminal behavior. Whether it be academic, social, moral, or personal...the prison systems of America have very little to provide, if not simply just less and less. Continuing to deny the U.S. prison population this single provision alone, is to continue to promote the ignorance of a system that, per capita, currently has imprisoned more human beings than any other nation in the world. The question why - even among us, the illiterate, is no longer any more profound than it is rhetorical. 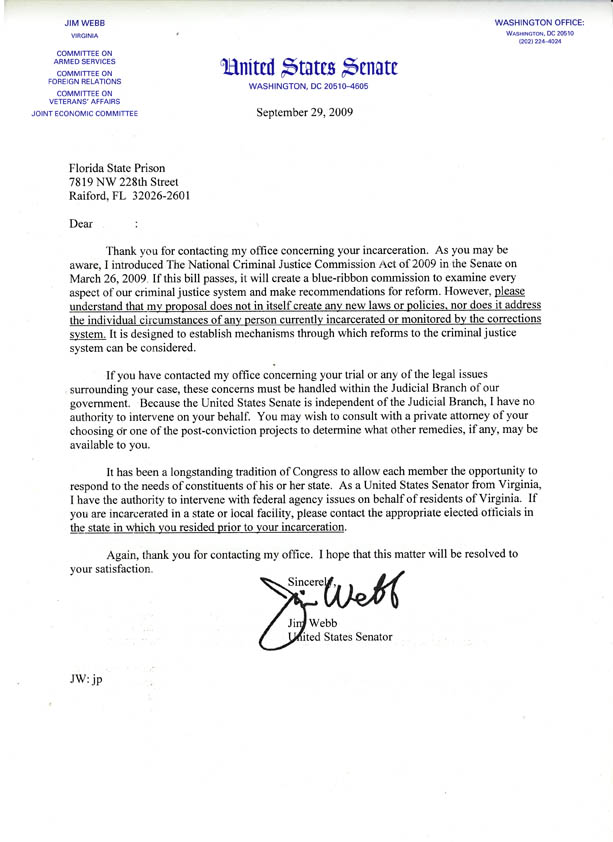 Dear Senator Webb,
Your letter of Sept. 29, 2009 has been received and upon contemplation it is my conclusion that it was somewhat automated. In no way could my original letter to this office have been construed as concerning my "trial or any of the legal issues surrounding [my] case." Furthermore, my contacting you, a Senator of Virginia, instead of a Senator in the state which I reside, should give credence to the reason. My Desire is to learn more about the National Criminal Justice Commission Act of 2009, and how we (the incarcerated) can help to further that bill. A personal response would be highly praised.

Go to Page 1
Index of Articles