by Soso of MIM(Prisons) August 2010 permalink 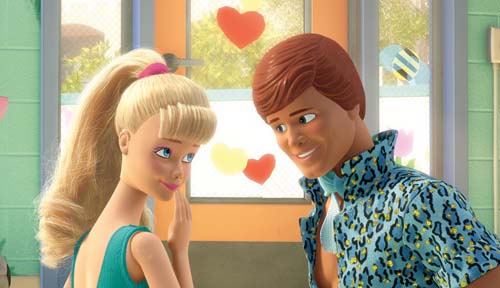 Sequel to Toy Story 1 and 2, this movie starts off with Andy, the boy who owns the toys featured in the movie, heading off to college and packing up his stuff. His toys are long forgotten in a trunk and are feeling forlorn about being abandoned. The toys end up being donated to a daycare, but not without much whining about the importance of loyalty to their original owner. Woody, the apparent hero of the movie, is an especially strong advocate of devotion to their one and only owner, even in the face of the logical argument that Andy has grown up and has no need for them any longer and so they should hope to move on to new kids.

We're not looking to liberate the toys of the world, but this movie has some insidious messages for both kids and adults. First there's this theme of loyalty to one owner, a message that is repeated later at the daycare center by the toys that have become evil dictators because they felt abandoned by their owners. This is a good subtle way of encouraging kids not to question the status quo or try to make change independently. Sure it didn't work out for the bad toys, but loyalty paid off for the good toys who end up in a good home in the end, with the blessing of their original owner.

Toy Story 3 does hammer home the point that it's not good to have evil dictators in charge. The Ken doll makes a little speech about how everyone should be treated equally to underscore that message. But this message is so blunt it's hard to see how anyone would really learn anything from it. And although the good toys work together against the evil dictator, they don't do any work among the masses of other oppressed toys to try to rally them to help. It was just a few focoist heroes, out to save themselves, who accidentally overthrew the evil dictator in their attempts to escape a bad situation. So the writers pass up an opportunity to promote organizing the people against the power structure in favor of focoist hero worship.

The one correct message in Toy Story 3 comes when the evil dictator toy and the good toys end up in the trash burning machine and they are all about to die. The good toys try to work with the evil dictator bear to save themselves and him, and he abuses their trust to save just himself. This is a lesson we can apply to the imperialists who will never give up their power peacefully and work with the people for the common good.

The last thing worth commenting on in this movie is the reinforcement of patriarchal gender roles. The two main female characters are Barbie (playing, well, a barbie doll who spends most of her time working on her relationship with Ken) and Jessie, who's a bit of a tom boy who at least gets to go along on adventures with Woody, but who is very much taken in by the romancing of a Spanish-speaking Buzz Lightyear. So basically the focus of the plot involving the two main female characters is romance. There is some mild mocking of gender roles around the Ken doll who has way more outfits than, it is implied, a normal man might have. But the implication seems to be that he's a toy more fit to be played with by a girl than a boy. Nothing very progressive.

Overall MIM(Prisons) would recommend this movie to supporters of the patriarchy and the imperialist system. It would be useful for training their children in some of the norms of the oppressive world that they love.