www.prisoncensorship.info is a media institution run by the Maoist Internationalist Ministry of Prisons. Here we collect and publicize reports of conditions behind the bars in U.$. prisons. Information about these incidents rarely makes it out of the prison, and when it does it is extremely rare that the reports are taken seriously and published. This historical record is important for documenting patterns of abuse, and also for informing people on the streets about what goes on behind the bars.

We hope this information will inspire people to take action and join the fight against the criminal injustice system. While we may not be able to immediately impact this particular instance of abuse, we can work to fundamentally change the system that permits and perpetuates it. The criminal injustice system is intimately tied up with imperialism, and serves as a tool of social control on the homeland, particularly targeting oppressed nations.

Today is the 5th day of a quarantine of approximately 100-200 prisoners, for just about 20 prisoners or less being sick. This is occurring at Mule Creek State Prison’s A-Yard Building 5. This is not a medical unit or has self-contained individual air circulation. By doing so CDCR puts all the other prisoners including myself at risk of catching the illness the other prisoners have.

Furthermore, the entire building full of prisoners are EOP (Enhanced Outpatient Program) a mental health unit. As such, by federal laws we are legally supposed to obtain a set amount of dayroom and yard time, as well as mental health groups and therapy. But this is not occurring at all! By doing this, CDCR knows they are willingly putting us at physical & mental risk. Such risk has already caused 1 EOP prisoner to cause him to ignite his cell on fire with his own self still within it!

This is proof of the CDCR being imperialists and our continued struggle to no longer be slaves and not under lock & key no more! As I send out this letter I also send out letters to the Prison Law Office in San Quentin.

by a California prisoner December 2015 permalink

I want to report another way the system tortures people in the Security Housing Units(SHU). Corcoran and Mule Creek State Prisons both throw away your legal mail. They do this in your face and behind your back.

I've tried to report this to the Inspector General and other offices. I filed a 602 grievance, but this don't work if your 602 arrive at the Office of the Appeal Coordinator. If you looking for help from the Office of the Ombudsman, this never happens, because the officer in both prisons tnrow away your mail in your face or they simply send back your envelope. The mail room has some yellow stickers that say "returned" and look just like those of the U.S. Postal Service, but it is easy to tell the difference if you look closely. They do this even when you have the correct address.

I lost my habeus corpus case because Mule Creek never sent out my extension time motion on 19 February 2015. I seen the officer throw it in the trash. At Mule Creek, officers Winkilend and Rechason do this a lot. Both officers are the only Black officers in the segregation building. Rechason likes to write "Refused signature", when that was never what happened.

The same thing happens at Corcoran. Here they often use the excuse that my name is written in a different order than in their database, even though they have the correct ID number. They don't deliver mail, magazines and even legal mail. Over here it is Officers Ponce, Lawrence and Padstoff who do that regularly.

I write a lot, it's true, but that is my problem. I'm working on my case. Officer Ponce and Lawrence told me in my face "fuck you write a lot" and they said I had a lot of mail and can't continue like that. Wow! What?! Like that in my face.

Retaliation for Fighting for Legal Rights

by a California prisoner April 2009 permalink

Well, for my efforts I was thrown in the hole when I was attempting to use the law library facilities in order to finish some work for a case that was scheduled for a telephone hearing the following day.

Now similar to my brother’s situation in North Carolina (ULK #7, March 2009) I was placed in a “security cage” (California prisoners are familiar with these) and left there from 6 am until 2 pm and I had an abscessed tooth at the time (documented and since crowned) and medical refused me my antibiotics and pain medication. By 2 pm I was so delirious with pain that they felt the need to cover the security cage I was in with a wool blanket and dump two fire extinguishers full of chemicals; one of them is known as 505 (lethal).

The next thing I recall was waking up in a cold bare cell with no means of comfort (mattress, blanket, nothing).

Since that attempt on my life I attempted to file a board of claims to the state, but it disappeared after my CCI got it from me. I had to give it to him because I had to get a registered trust statement from him to file with the state. California keeps her “ducks” in a row.

So, as a result of my injury, the state of California’s prison at Mule Crrek accommodates their medically assigned bottom bunk prisoners to bare naked cells in the hole. No property, no bunk, just a mattress on the floor. This is common practice, my neighbor is a seventy plus year old man, forced to sleep on the floor!

If a nation is judged by the way she treats her prisoners, this country is damned. 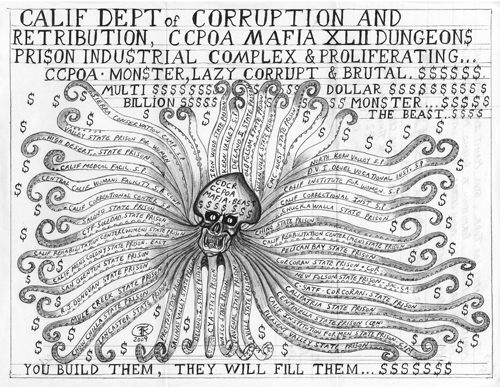 Assault for refusing to double cell

by a California prisoner September 2008 permalink

I was placed in ad-seg again on July 5th, 2008. The corrupt Mule Creek State Prison CCPOA mafia prison guards dispatched six of their inmate rat pack cronies to assault me in my cell because I refuse to give up my single cell status and take a second prisoner in the cell. The six inmate rats beat me unconscious, both my right and left eyes were swollen shut for over 30 days. They tried to throw me off the tier. I sustained neck, ribs, liver and kidney damage. I was med-i-vac transported to Sutter Amador hospital. The CDCR guards kept punching me in the chest at the hospital, calling me names. I kept slipping in and out of consciousness. I woke up and five days later MCSP CDCR is charging me with assault on a CDCR-CCPOA-Mafia peace officer.

So now I'm caged in ad-seg, held on a D.A. referral on a felony charge of assault on a peace officer. And I still refuse to double cell. The struggle continues.